I am going to preface this part of my blog by saying that bbq is a deeply personal subject for most people. I imagine that there have been Hatfield/McCoy type feuds about whose ‘que is the best and while I am a woman of strong opinions, I would prefer not to meet any pissed off ‘que fan with a shotgun in an alley anytime soon…
Here in town, I’ve eaten ‘que at the two big chains –Hoggy’s and City BBQ. City BBQ and Hoggy’s ain’t that bad…but they ain’t that great either. They are acceptable bbq. If it was all I could get, I would be fine with that. However, I know that there is extraordinary ‘que to be had. I would rather wait for great than settle for O.K.
(My current in-town favorite is Smackie’s. You’ve heard me sing their praises before, so I won’t belt out that tune here.)
In St. Louis, there is a chain called Bandana’s. It is the equivalent of Hoggy’s - acceptable, but not the greatest. Every time I’ve been to St. Louis, this is the only place anyone could tell me had good bbq. However, this time I got to venture out into the surrounding area and went to Roper’s Ribs. Tate, who you know through last year’s adventure at Comic-con, did some research and wanted to visit Roper’s. 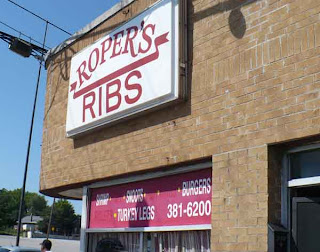 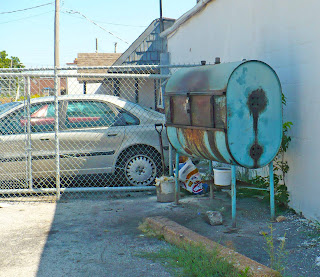 And in the back...
Roper’s is a tiny place north of St. Louis proper. There are three 4-tops, and an order window. This was obviously a place designed for carry out. On the walls, there are autographed pictures of celebrities proclaiming their undying love for Roper’s Ribs and a picture menu featuring all the items you can order. 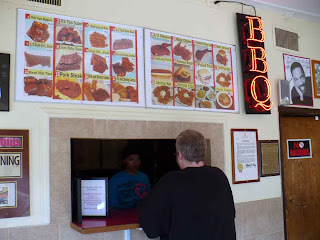 Check out that menu. It was torture while we were waiting...
I wish I lived closer to St. Louis, because there is no way you can eat everything on Roper’s menu in one visit. They have an amazing array of goodie – including deep fried shrimp, snouts, ribs, rib tips, and brisket to name a few. Tate and I stared open mouthed for a few minutes while the two guys in front of us ordered. We finally settled on a rack of St. Louis style ribs, a brisket sandwich and rib tips. 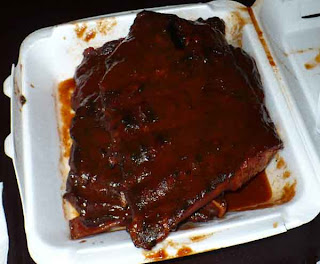 Back at the hotel, we popped open the containers and started in. I love ribs. The St. Louis cut is my preferred style and these were truly excellent. They were cooked until done, but not overdone and soft. The sauce was a nice balance of tomato, sweet, sour and spicy. The tips were the same way – If you like to gnaw around the cartilage on a big slab of ribs, then rib tips are for you. 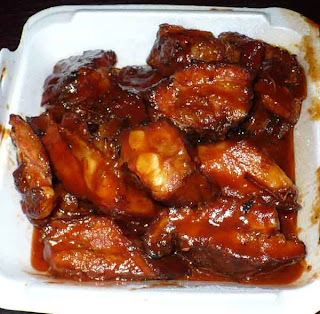 Tips.....hmmmmmmmmmmmmmmmmm
Tate ate the brisket. He said the flavor was good, but he disliked the way it was thin sliced – almost like a deli meat. We are used to chunks of brisket like we eat at Smackie’s, so we decided we were not qualified to rule on the brisket.
Our next stop was Kansas City – both states – MO and KS.
On our last trip to KC, we went to Rosedale’s. This year we went to two of the big players in town: Oklahoma Joe’s and Gates. 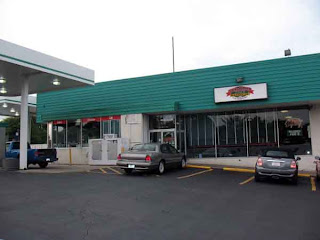 BBQ and Gas!!
Oklahoma Joe’s first. This ‘que joint was on Anthony Bourdain’s “13 places to eat before you die” list for Men’s Health magazine. This is why Tate was absolutely adamant that we go. This restaurant is really in a gas station. (I am beginning to think that being in a gas station may be one of the hallmarks of a good “joint”. Thank you, Diner, Drive-ins and Dives!)
I ordered a pulled pork sandwich and coleslaw on the side. Tate ordered a combo plate that had ribs and brisket.
The pulled pork was good. Moist and perfectly done, lightly sauced with their house sauce. (I was not offered a choice of sauces at the counter.) I added a little more of their “Night of the Living Sauce”. Most folks would find “the Living Sauce” fairly high on the heat scale, but for our group it was just warm. 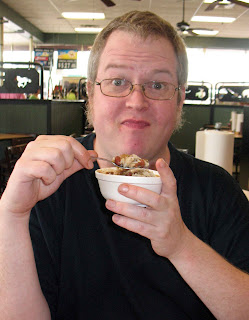 This is as happy as Tate ever looks...
and it took eating some very nice red beans and rice to do it...
Tate traded me a bone for a bite of my sandwich. The meat on my rib was too soft and over done. I have teeth and like to get a little resistance when I pull the meat off the bone. This fell off with the first bite and got sauce all over my top – naughty naughty. Tate’s ribs came in two parts: the larger ribs and a smaller end. The large part was overdone, but the smaller end was perfect and tasted fantastic. That’s not a good sign to me… I like consistency in my ribs… 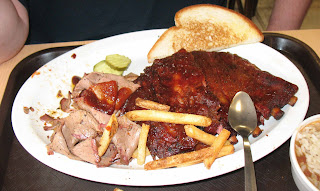 So would I put this on my list of places to eat before you die? Probably not - there was no life changing revelation about ‘que that would put this restaurant onto my list. I did, however, have that moment when I went to Allen and Sons and had Carolina pulled pork for the first time. It seems to me that KC ‘que is all about the sauce. Carolina ‘que was more about the pig – the sauce enhances the sweetness of the pork and the whole is more than the sum of its parts. Oklahoma Joe’s was some inconsistent meat with a pretty decent sauce on top.
Last on the list was Gates and Sons BBQ. Along with Arthur Bryant’s, this ‘que joint is a KC institution. I understand that most folks in KC fall into one of the two camps. Gates and Sons has the traditional tomato based sauce, with a balance of sweet, spicy and sour. Arthur Bryant’s (according to our friends who live in KC) is a little more vinegary. 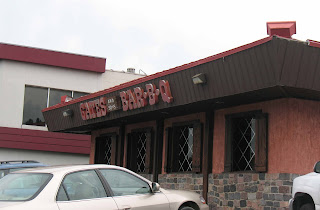 Even if Gates is not your cup of ‘que, you have to go for the experience. The order taker belts out “Can I take your order?” and then relays your request back to the kitchen staff all at the same 100 decibels. This place is not for the timid. Jason and Bryan, our friends from KC, were all excited to see how high we would jump upon entering. Fortunately for us, we are not easily frightened. Otherwise we would never have heard the end of it. 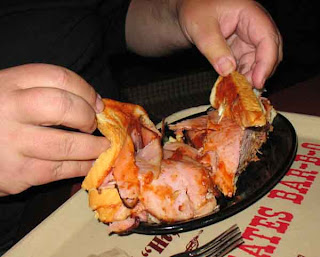 Half and half sandwich
I once again got a pulled pork sandwich (see a trend?). I had wanted some burnt ends, but we had spent too long in the US Toys Magic Shop, which is right next door. The rule is – get there early for the burnt ends, ‘cuz when they are gone, they are gone. (Damn you magic people and your penchant for prolonged discussions about sponge bunnies!) Tony got a half and half sandwich consisting of ham and brisket and Tate decided to go whole hog (so to speak) and order the Four Bone combo which had ham, four ribs, brisket and two sides for $20. 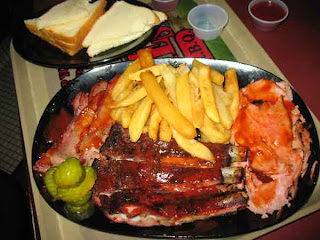 Four bone platter
Gates and Sons cuts your meat to order, so when the order taker screams back what you want, they fish out the appropriate chuck of protein and cut away. My pulled pork was done correctly, moist and not too soft. It was not sauced before serving. I added their spicy sauce at the table.
Tony’s sandwich was really awesome. It was served on plain white poofy bread, but I am not going to hold that against it. Barbequed ham is really tasty and when piled up with the brisket – mmmmmmm. I am going to have to try replicating the ham at home soon. 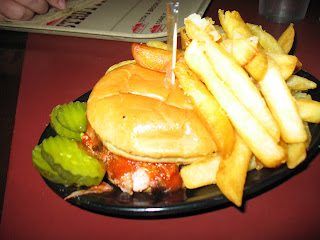 Pulled Pork with French Fries.
The fries were really strange - like mashed potatoes in a crispy crust.
Not bad, but strange.
Tate traded me a bone for some of the pulled pork. The meat has some tooth to it without being tough. Tate was not too thrilled with the ribs because there were some small slivers of bone along the top edge of ribs. He did like the ham, but once again refused to rate the brisket because of the way it was sliced.
I had heard from other folks in town that we talked to that they did not like the meat at Gates because it was too tough, but loved the sauce. The sauce was a nice middle of the road tomato based sauce. The spicy sauce was decent, but not quite as good as the sauce from Oklahoma Joe’s.
If I had to, I would eat at Gates again. It was pretty good and the experience made it all the more fun.
So who was better Gates or Oklahoma Joe’s? Wow that is hard question…
If I had to go by sauce, it would be Joe’s. If I had to go by meat, I would pick Gates (mostly because the product was consistent, if the ribs had been perfect, it would have been Joe's hands down).
The next question is – if I had a craving for KC style ‘que where would I drive to for satisfaction?
I would say the winner would be Roper’s Ribs in St. Louis. Sorry KC!
Side note: For me, the perfect side dish for barbeque is cole slaw. And I am super picky about it too. Slaw should be cool and creamy, not watery, with a nice balance of salt, sweet and vinegar over top of crisp cabbage. I ate cole slaw at all three places mentioned above but my favorite was at Oklahoma Joe’s. The dressing was dead on and was not too gloppy. The cabbage was shredded rather large and held a nice crunch. The slaw at Roper’s was good, but not outstanding. Gates was good as far as dressing and consistency, but had green pepper in it – which I did not like. The green pepper flavor dominated the cabbage.
Roper's Ribs
6929 W Florissant Ave
St Louis, MO 63136

Have you ever run into BBQ ham any closer to Cols than Gates? I used to go to KC regularly and ate it there all the time.

Paul - No I haven't. I am surprised because it is so good - you would think someone would put it on their menu locally...

Great to know about Roper's! I like the back view (so to speak) of the place--looks v. promising. Tamara and I will be there in late October--would be great to squeeze in a little 'cue.

Zora, please get a snout and let me know how it is...

Have you heard if Smackie's is closed or not? My dad went today for his $1 rib bone Saturday tradition, and he said there was paper on the windows, and a for lease sign.

This is news to me - I had stopped in about three weeks ago and there was no indication that they were closing. I sent off an email to the owners - let's see what happens.

I did see their portable unit off of James Road about a month ago - maybe that is their new home...

Rosie
Columbus, Ohio, United States
I'm a forty forty year old (time does march on!) fat chick who eats, drinks and bitches her way through life. I share all this wealth with a college-aged daughter, a not-as-fat smartass hubby and a cadre of amusing personalities. (I am sorry to tell you that the bully goldfish died and took the swirly fun-ride to the other side...)

People Who Actually Want To Be Seen Talking To Me

Stuff so funny I almost wee'd myself and in some cases I did!

What's all this about then?